In my personal opinion, I think that 2017 has been a great year for theatre. There have been so many great shows which I have seen over the past year…and the odd few which were awful! As we are nearing the end of the year I have decided to put together a little post about the top shows that I have had the honour of seeing.

I am currently sat here going through my ticket scrapbook refreshing my mind on what I have actually seen this year alone (which is a lot!) and what ones I enjoyed and still stand out head and shoulders above the rest. The way I’m writing this is in no particular order, it’s simply what comes to mind first. I am also not writing this in the ‘traditional’ way by just listing a short description of the show. I’ve decided that I want to reveal why they stood out/meant a lot to me.

(If I have reviewed the show, the review will be linked to the title)

I’ve seen this one about 40 times this year alone so its a good one to start with! To be honest, I have lost track just how many times I have seen the show since it opened last November. That is embarrassing! It has just been a very special show for me. It has always had the ability to make me laugh and cry my heart out and provides 2 hours 20 minutes of pure escapism. I have relied on it heavily as therapy! It was also amazing seeing friends on stage (before cast change) and see them develop. The new cast are just as good! 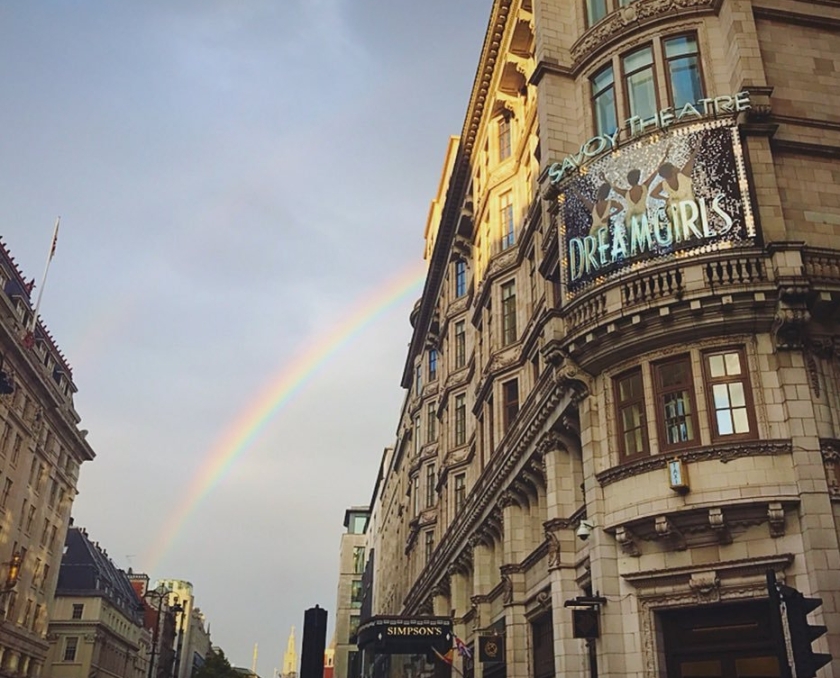 This show always jumps to mind. I  saw this show on a whim as I managed to get a cheap ticket and I fell in love! Jonathan Larson is a genius and creates beautiful musicals (Including Rent which pops up later on). I clearly remember going into that show feeling rather deflated with life. I left with a new fire ignited within (that sounds so cheesy!) I came out loving the show and believing that my own personal dreams are not too far out of reach. 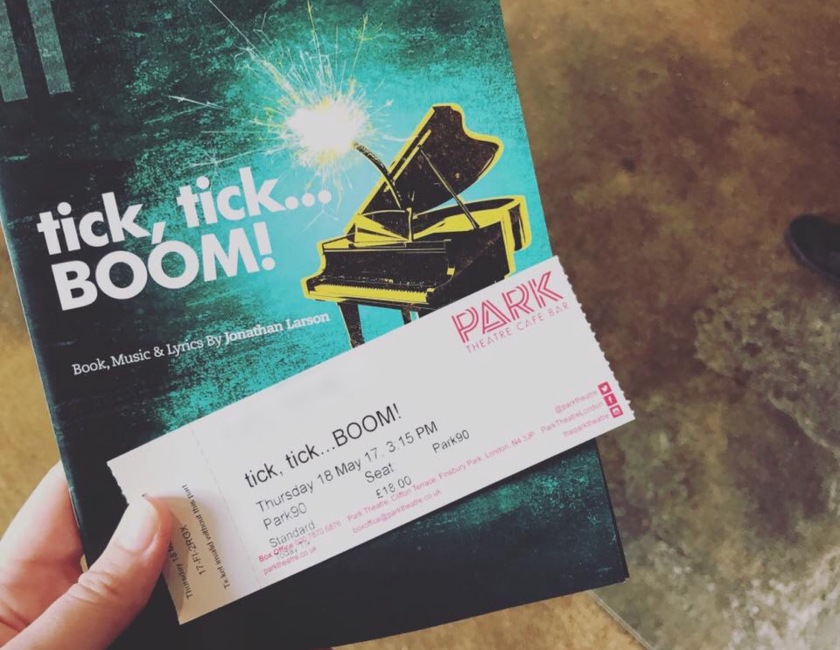 This was outstanding! Such an incredible immersive theatre experience and I loved every single minute of the show. My inner child was released as we all relived this iconic childhood classic.

A one off concert performance of the show conducted by the one and only Jason Robert Brown! It was incredible seeing this show for the first time. Everyone was in such high spirits and you coult tell that everyone on stage was having the time of their lives. It would be great to see Honeymoon in Vegas back in the west end soon and for a longer run! 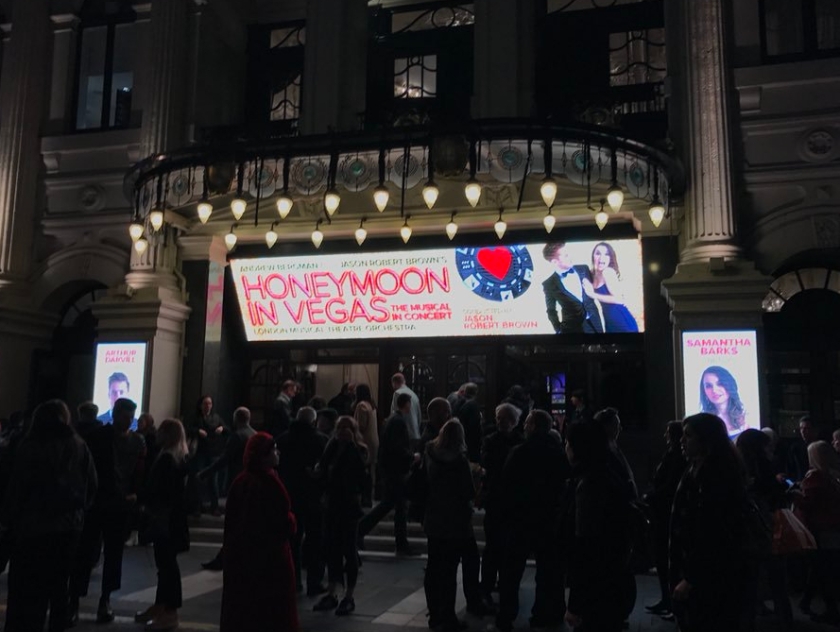 This is a strange one to put on the list however I really enjoyed it (considering just how much I hate Shakespeare!). Very rarely you find a show that leaves you crying with laughter and questioning “what the f*ck have I just watched?!”. 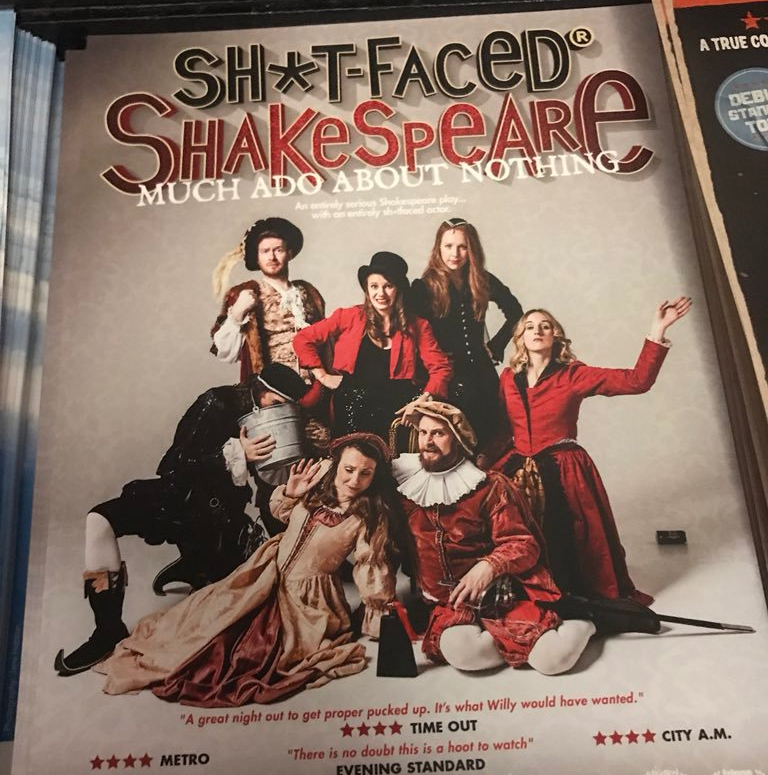 Flawless. The staging. The cast. Everything was flawless! It definitely gave me a new appreciation for the story and music. If I’d have caught it earlier in its run I could have easily seen this numerous times. 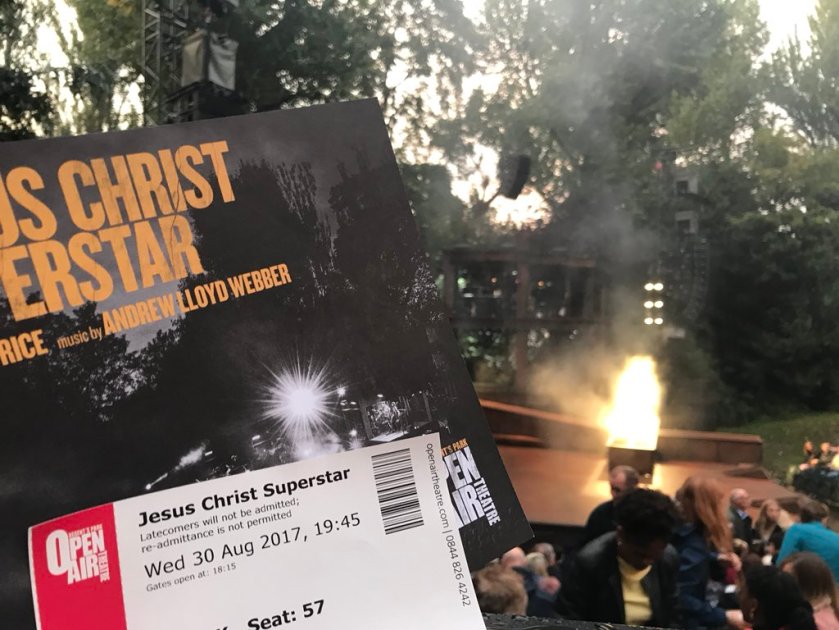 7.  Little Beasts, The Other Palace

Considering I don’t normally see children’s theatre, I thought this was great. This was a workshop production but was already very strong. With a bit more fine tuning this could really be an amazing family show. I adored the concept of ‘what happens to naughty children?’. 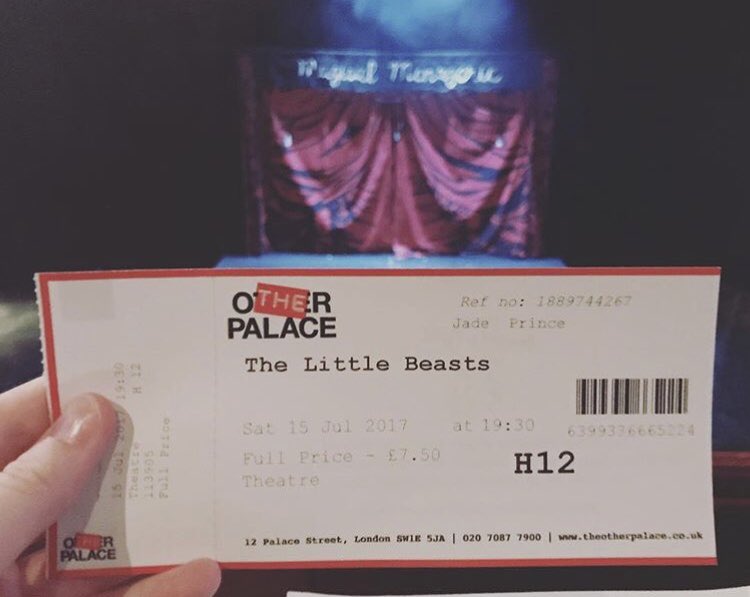 If any of you saw this production you will know why I’ve put it on the list! I, like many other rent heads had waited years to see this in the UK and it finally happened. It was everything I was hoping for and so much more. The cast. The set. It was all just a little bit too much! It is the only show I cried uncontrollably through. Even leaving the theatre I was still sobbing. No show has ever had that effect on me so it was something pretty special. I saw it a couple of times on this tour and it just got better and better. 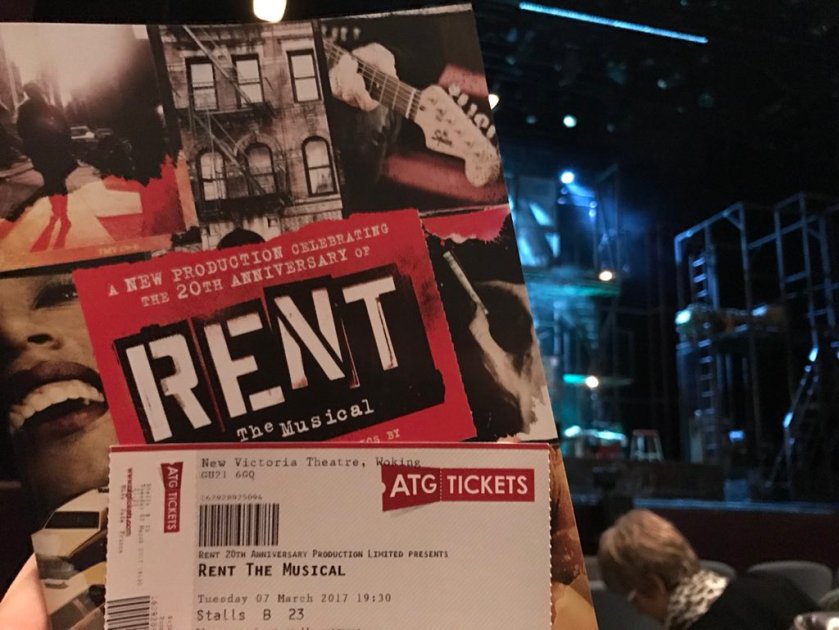 So, I don’t normally see plays (something I am hoping to change in 2018) and I wanted to see what all the hype for this show was for. I’d managed to find a relatively cheap ticket so went along. To say this play was around the 3 hour mark, it flew by. I have never been to engrossed in a show. Imelda Staunton was sensational. 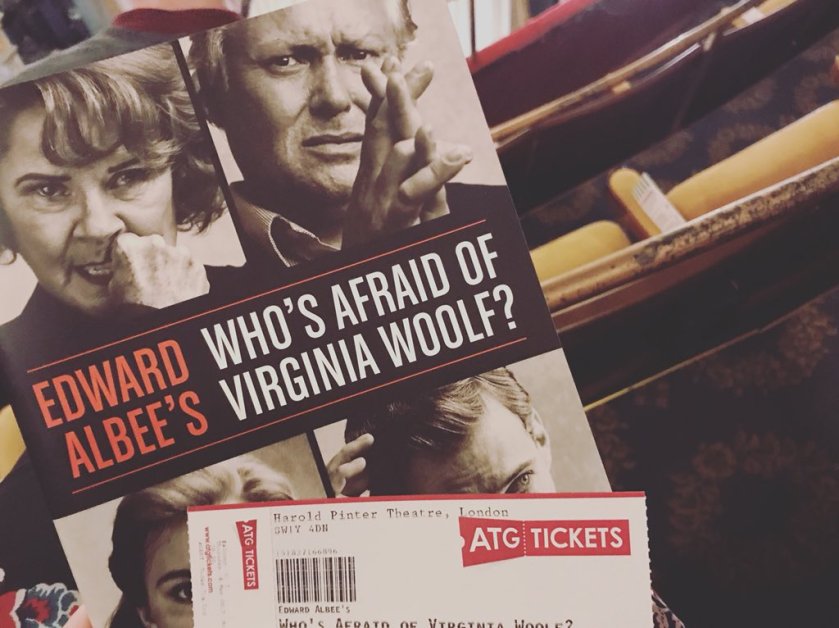 A very moving piece. Once again I saw this one on a whim (cheap tickets on the day!) and wasn’t really expecting much. The story was so touching. This was its first run in the west end as it is a new musical and I really hope this goes somewhere. I was beautiful and really tugged on my heart strings. 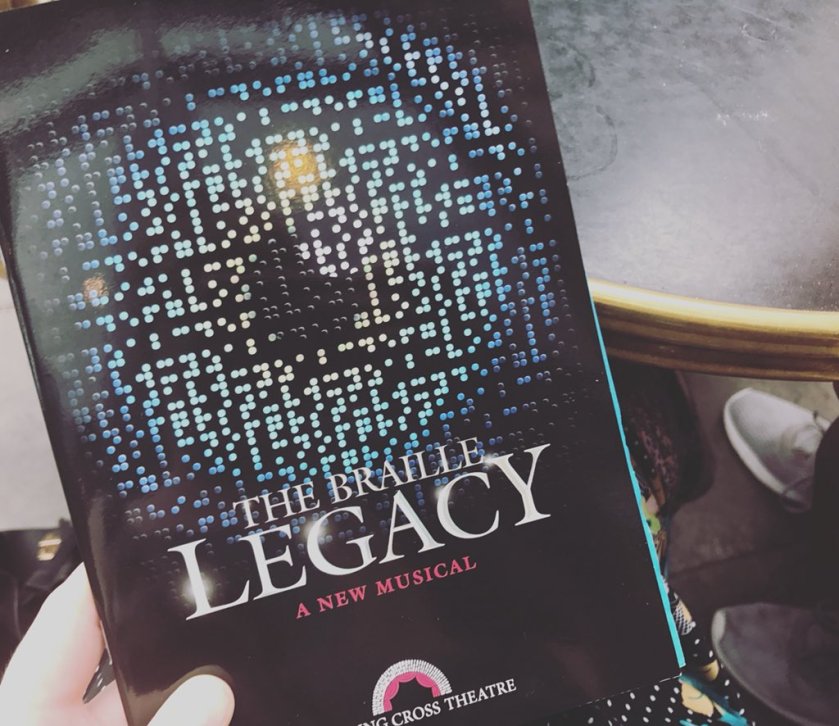 There we go, my top 10 shows of 2017. Do you agree with this choice or are there some you’d change? Let me know in the comments believe and once again please share with friends and follow ginger in the theatre on all our social media accounts! Here’s to 2018!! All theatre nerds will know this story as the classic opera which inspired the smash hit musical ‘Rent’. For those unfamiliar with it, La Bohème is an intertwining of addiction and love both set to collide. Which will stand tall at the end? Love? Drugs?

This is a modern take on Puccini’s classic opera which is undeniably timeless. Adam Spreadbury-Maher and Becca Marriott have created a brand new retelling of the story which made me laugh and cry.

I’ve really wanted to see this show for a long time and seeing this brand new adaptation of it was stunning. It is so contemporary. Most certainly not a traditional opera. In my mind, an opera is this huge grand affair which lasts for hours with several acts but this is the complete opposite. I found that really refreshing.

The venue itself is so intimate. The cast don’t use any microphones because they just aren’t needed. I loved the way the intimate venue was used to the performers benefit (but more on that in a short while!)

In this version the first act is very comical. Lots of jokes thrown in referencing recent politics and news. A real bromance is seen between Mark and Ralph. The first act also really showed off the set and lighting creatives’ talent. The lighting (by Nic Farman) was great. The apartment was softly lit with several lamps adding to the soft light. Whereas the next scene in the pub was a harsh chandelier radiating yellow beams with another spot light focused on the area. It was very much the typical pub lighting you would expect. The set was also fabulous, it was distressed and mismatched but it didn’t distract your eye from the performance.

Another highlight of act 1 was the use of the audience during the pub scene. With it being such an intimate venue they really used it well. A lively vibe was created. One you’d expect in a pub during the Christmas period.

The performance itself was kept very simple and the music was also in keeping with this. Throughout the whole show it was just a pianist and cellist playing. Rather beautiful.

One song shorty into act 2 was beautiful to listen to however I couldn’t understand any of the lyrics sung. This was really difficult simply because all four actors were singing at once and no microphones were used so certain voices couldn’t be highlighted at certain times. The four voices were wonderful but when all at once, drowned each other out. As expected act 2 was incredibly emotional and Becca Marriott (Mimi) handled this so well. Mimi is a very difficult character to portray but it seemed to come so naturally to her. The other stand out performer was Honey Rouhani (Musetta). I absolutely adored her performance! She had the most ad-libs in the script as she had so much interaction with audience members during act 1. She was brilliant at this and I loved how she was so comfortable with the character she could strike up conversations with some male ‘prey’ in the audience to pass the time when her dialogue went quiet during the scene. Another thing I must say is that Matthew Kimble (Ralph) can sing to me anytime! His voice! Dreamy!

La Bohème is booking until 6th January 2018. This is such a beautiful piece and if you get the chance, do go see it. More information on the show and tickets can be found here: http://www.atgtickets.com/venues/trafalgar-studios/

From The Box Office are doing a great offer currently where you can save up to 50% on tickets: https://www.fromtheboxoffice.com/city/2957-london/43OA-la-boheme/?utm_source=bing&utm_medium=cpc&utm_campaign=Shows%20-%20London%20Targeted&utm_term=%2Bla%20%2Bboheme%20%2Btrafalgar%20%2Bstudios&utm_content=atg_av%20La%20Boheme%2043OA With a limited run at Park theatre Tick, Tick…BOOM! Most certainly did not disappoint. From the Pulitzer Prize winner, Jonathan Larson, the story follows three friends (Jonathan, Susan and Michael) during the 1990s as they arrive and start their journey through their thirties. While Jonathan spends the eve of his thirtieth birthday contemplating his career choices, his girlfriend (Susan) dreams of being married and venturing out of the city and his best friend (Michael) is achieving huge success in business. This sweet and intimate show takes you on a journey of self-discovery with the strong reminder of never letting go of your dreams no matter what life throws at you.

All three cast members were strong performers, but Jordan Shaw really stood out. Naturally funny when delivering his lines and was super at switching between drastically different minor characters at various point during the show. Despite the fact that there were only three cast members, the hustle and bustle of New York was still so clear on stage. Small things like the stage transitions really helped: the three actors moving props whilst noticeably changing characters. Heading into “Sunday” I was really given the feeling of being sat in the middle of a café in SOHO! In total there were 7 other characters split wonderfully between Gillian Saker and Jordan Shaw alongside their main roles of Susan and Michael. Chris Jenkins gave the audience a real feeling of empathy towards Jonathan as he pursued his dream of becoming a composer.

Superb vocals from all cast members although it was difficult to hear during some songs, as the main keys were very loud and seemed to drown out the vocals. This was more prominent at the start of the show and did not really pose an issue when the three characters came together for certain numbers. The majority of the songs were very engaging (helped by the intimacy of the venue) even the solos had a real connection to them. Gillian Saker’s performance during “come to your senses” was mesmerising! The three came together so well during the larger numbers such as “30/90” and there was never a moment I questioned the friendship portrayed.

Park 90 is a very intimate theatre auditorium which initially caused me doubt, but worked well in the favour of the show. The set, designed by Nik Corrall, was a fabulous use of space with simple but brilliant transitions.

Initially I was slightly unsure as I walked in however, a few numbers in, my mind was put at ease and I came out loving the show and believing that my own personal dreams are not too far out of reach.

Playing at Park Theatre until May 27th, 2017. Tickets: https://www.parktheatre.co.uk/whats-on/tick-tick-boom