With a title like ‘comfort zone’ I was expecting to be thrown out of my own comfort zone however I was pleasantly surprised I wasn’t.

Instead, you learn about Francesco’s own experience in leaving his own comfort zone, Italy, his home country. He brought to the stage his move from Italy to Britain and the challenges/cultural differences he faced along the way but now he is facing his biggest challenge yet…Brexit.

Francesco started the show off by focusing on Brexit and his take on the situation. I have to say, his theory on why Brexit is happening was hilarious! But, yet, simple enough. He came into the country. He hadn’t been here long and then BOOM, England are going. I mean, I didn’t question it too much. Francesco even admitted himself that he has a track record of causing government upheaval. Ha!

It was a really enjoyable show. The audience, including myself, loved it and we were all howling with laughter.

Something I really did notice was that there was no awkwardness at the start of the show. I’ve seen a few comedians now and it is so typical for the audience to be reserved at the start. Gauging the other audience members, the performer and what a safe reaction level would be. However, in this scenarios, Francesco walked out and you knew exactly what you were going to get.

I wouldn’t say that his material was out of this world and 100% original but his delivery was what made it. He focused an awful lot on the stereotypes associated with Italians and the British which was perfectly fine. Once again, a lot of those points you were very much expecting but there were a few in there that caught everyone off guard. But it was so brutally honest.

Overall, I really enjoyed the night. It was easy laughter in response to light hearted humour. There was nothing too offensive or too outrageous thrown into the mix. I would definitely love to revisit Francesco on his next tour!

He’s also got himself all fancy with a website and everything! It’s one with a mailing list. Just saying. For you to keep up to date with upcoming shows if you fancied it!

Editor’s note: I’m so sorry with that very last section. I’ve been watching far too much RuPaul’s Drag Race. I have no shame!

Sarah Kendall spent a few nights of her UK tour down in the basement of Soho theatre, the perfect venue for a comedy act. The tour, one-seventeen, takes you on a turbulent retelling of Sarah’s life from the early years up to the present day. It tackles everything; the brilliant highs, some painful lows and everything called life in between. Luck, being a key theme, is able to connect everything at various points during the show.

I have to say this wasn’t the best comedy act I have seen but it most certainly wasn’t the worst. It was a nice, acceptable middle level.

I warmed to her straight away when she called the audience c*nts in under a minute of being on stage. It definitely got the laughs! A real ice breaker. I did appreciate how the word flowed so freely from her mouth. One thing I cannot stand is when comedians scripts that word in as an attempt to get more laughs and it does normally fails miserably. For Sarah, it just slipped out as if she was having a conversation with some friends.

I have to hand it to her for the originality in her jokes. It was real life. Not necessarily real life that everyone could relate to. A few of these stories kind of left me feeling slightly awkward. Not that they were inappropriate just not relatable. I started getting that vibe from other audience members too. It was a rollercoaster of a show. Some highs which were so funny but then there were other parts where I didn’t know whether to laugh or not. It just seemed weird having such serious matters in a comedy show especially presented in that way. The subject matters were obviously life stories, I just felt they went on a little too long and started to bring a bit of a downer on the show. This feeling, however, was immediately removed when Sarah whipped out the next joke!

Something I like about a good comedy show is when the comedian is able to link all the stories together and Sarah certainly did this. I loved the referencing of previous things she spoke about and doubling up the jokes.

Despite the rollercoaster of funny to serious, it had such a great pace. There was never a point where I was urging it to end. Sarah is definitely a great story teller and had the audience in the palm of her hand. Something in comedians which is few and far between specially with the serious matters.

There was another point which made me feel a bit ‘meh’ and that was the ending of the show. It had a rather abrupt ending which left you wanting more. I think it would have been great to see Sarah leave the stage on a real high with the audience roaring with laughter like they did during so much of the show.

Overall, it was a very enjoyable show. One I would recommend. I’d be interested in seeing her again when she comes to my home town later in the tour.

Sarah is currently touring the UK with One-Seventeen. Click here for more information on her upcoming dates and tickets.

Carl Barron – Drinking with a Fork Carl Barron – Drinking with a Fork

“It’s gonna be a top night”

I was a little dubious at first when I got the email reading “AUSTRALIAN’S BIGGEST SELLING COMEDIAN TO PLAY AT HAMMERSMITH APOLLO”. That is one hell of a big claim and I was praying Carl Barron would live up to expectations. About 15 minutes into the show I started questioning myself as to why I even had doubts in the first place!

From Longreach in Queensland, Carl most certainly has a unique stance in the comedy world. A refreshing approach to the term stand-up. He had spent many years tiling roofs before branching into the comedy circle which has propelled him higher than any of those roof s could have. A man of many talents. A roofer who can play the guitar and who was raised by fuckwitts but didn’t turn into too much of a fuckwitt himself!

I personally enjoyed the show. An hour and a half of pure laughs. The Aussies definitely came out in force and I had that odd feeling of being the only British person there! It was at this point it dawned on me, ‘OMG! What if I don’t understand any of the context?’ Another doubt which was unwarranted! There were only a few moments where the accent made things difficult to understand as Carl got more passionate about a joke. And a few of the sayings appeared to have different meanings. It took about ten mentions of the line ‘she had the shits’ to understand that in Australia it actually means to be annoyed with someone. Over here in the UK we tend to use that line to convey someone has diarreha! A little different!

My only real criticism would be that one or two of the jokes were dragged out a little longer than needed. At these points I did start to lose interest but this was reeled straight back in when the topic changed.

Hands down I can say he is the only non-offensive comedian I have seen. A lot fo comedians these days rely on controversial topics and stereotypes to win them laughs however Carl did not need any of this. His use of relatable and honest material made the whole of Hammersmith Apollo howl with laughter! I’d say that he is suitable for the whole family. It must be noted that he does swear during his shows but he actually highlighted this potential issue himself and then justified his reason for that so perfectly.

For me, it’s a great sign when the audience are quoting the show on the way home! “It wasn’t the first 15, it was those last 2” in my case referring to the sharing box of chicken nuggets demolished on the train home!

It’s a shame he only had one London date but be sure to keep an eye out for future UK dates on the website I shall link below. It really was a great night! He’s back doing shows in Australia and New Zealand for a little while now but be sure to snap up those tickets when he’s back on British soil. The Aussies will definitely put up a fight for tickets but give them a beer and they should be grand! **Just like everything else in my life at this present moment, this review is slightly delayed!** 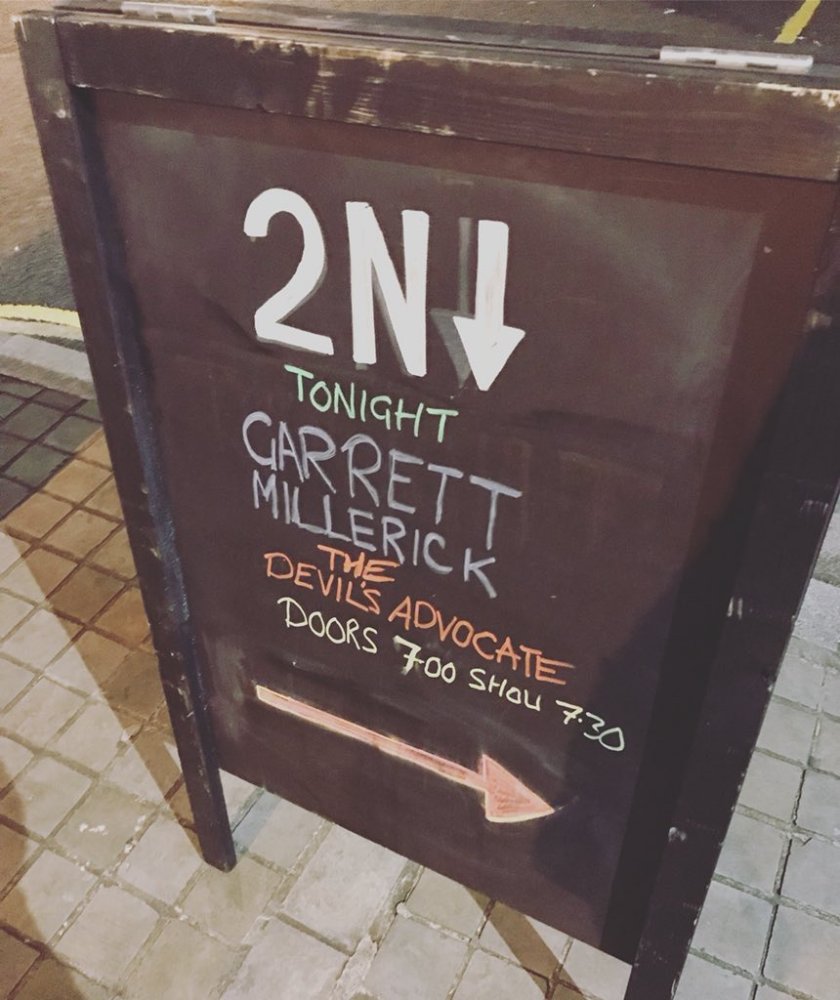 What if you slowly became the person you least wanted to be? But what if that person just so happened to be Jeremy Clarkson? Hmm.. Moving away from the hustle and bustle of London could also mean moving further away from that self. This became true for Garrett as he moved to drab Essex. ‘OMG?! Shu’ up!’ (<– I’m sorry but I really had to satisfy that urge!) The conversations of life slowly turned to football, DIY, fines and rubbish removal. After it’s popular run at Edinburgh Fringe 2017, Garrett retells this rather disturbing and eye opening story a little closer to home.

This was a very enjoyable comedy piece highlighting some of the honest truths within today’s world. Whether that is the complete culture change within the space of 50 miles, advertisement rammed down your throat or those strange ‘camps’ we call university. All aspects were hilarious and very much relatable!

Garrett is a comedian who is naturally funny. He doesn’t need any gimmicks or crude jokes to make the audience laugh. He is a true performer! From the moment he stepped on stage he demanded our attention AND held it for the duration of the show. I loved the diversity in his delivery on stage. It was really nice to see the energy. My own experience of comedians (rather limited) consists of them walking around the stage talking at you. Then occasionally getting more passionate/energetic but then ultimately reverting back to their norm. This was not the case with Garrett. He could be talking to the audience as you would in a regular conversation and then in the next moment he would be yelling and really getting into it, not just for the sake of it though. It would be about something that really angers him. In all honesty the show was kinda like watching therapy on stage. There were jokes made towards this element, too!

I also loved the fact his material was original. It is up to date. Everything he spoke about was so easy to picture happening in reality which made it even funnier. Drunk guy just landed in Australia being informed his card has experienced fraudulent activity but he’s the one doing that “fraudulent” activity and now has no access to no money or food because the woman thousands of miles away in a call center is enjoying his pain! To funny!

Brutally honest. But we all agree with it.

This review does not do the man justice. He is definitely one you need to see to fully appreciate. But here’s a little taster: https://www.comedy.co.uk/live/features/garrett_millerick_terrible_flights_story/

He also runs The Schadenfreude Cabaret so check that one out too where you can see a range of sketches, stand up and character comedy!

Follow Ginger in the Theatre on WordPress.com
Join 800 other followers