Theatre is back! I am late saying those words because I haven’t had the chance to get to the theatre since everything started opening back up and it feels marvellous.

What was even more marvellous was having Priscilla Queen of the Desert being the show to come back to! It was such a great show filled with everything camp, bright, colourful, sparkly and accompanied with complete bops (yes, I have just said bops!)

Based on the 1994 movie with the same name, Priscilla Queen of the Desert drops you in the heart of the Australian outback where Priscilla carries Tick, Adam and Bernadette in style to Alice Springs where they are set to perform. The journey is filled with several surprises, new relationships, and small towns where the flamboyant drag lifestyle isn’t welcomed with open arms.

I have to say the script was my favourite part. It was so quick-witted that I found myself still laughing at the joke just delivered and missed the next one being fired! I always appreciate intelligent humour. So often can shows pack in crude joke after crude joke causing the audience to think ‘here we go again’ but this script was very different. There were the crude jokes and many innuendos but there was also a large number of really clever one liners that caught me off guard. Obviously with humour the delivery is paramount and this cast definitely delivers the humour.

The choreography began to get a little repetitive but this was forgiven with the amount of energy the cast put into it. There were a couple of costumes that caught my eye but not always in the good way. I love drag and all of the glitz and glamour associated with the wardrobe so my eyes were very much analysing every piece on stage. There were a few numbers where, to me, the costumes detracted from the choreography and looked bulky not allowing for fluid movements. Within the cast there was a great diversity of body types which in my opinion you don’t get to see as often on stage especially for female cast members so that was incredibly refreshing. With this I feel as if the wardrobe department neglected some of the costumes with focus on the trench coats that made appearances several times during the show. It didn’t appear they were all tailored to the individual bodies leaving some cast members looking a little drowned in the coats.

However, apart from that little nag there literally wasn’t anything else to fault. It was such a fabulous night out and one that I would highly recommend for people who have missed the theatre and are a little apprehensive about going back. The whole auditorium was filled with such energy that it was very easy to forget what this past year and a half has entailed. There is no way you can sit there and not feel happy with the songs that flood the theatre. The story does take some dark turns but I loved the fact that as soon as the opening bars of the next number were heard, a subtle murmur through the auditorium started with the realisation that although the scene was sad, the music irony wasn’t going to let it stay there.

Priscilla Queen of the Desert will be at New Theatre Oxford until 28th August 2021 before continuing with its UK Tour.

Information and tickets for New Theatre Oxford can be found here.

Information, venue and tickets for the rest of the tour can be found here.

Stay safe, wear a mask and enjoy the theatre!

Right off the bat, I wasn’t too sure on the show however the second act won me over. Having had time to digest it all, there is still one element of the show that has me umming and ahhing. I will discuss this later on in the review but there will be a completely different post focusing on this practice in the theatre world in general.

‘Let It Be’ has been on a hiatus recently but has come back new and improved. It was perviously known and loved not only in the West End but also on tour up and down the UK. It takes you on a journey witnessing The Beatles’ rise to fame and then the years when they went separate ways. This Let It Be: Part 2 even gives you prime access to the concert that never was. One night and one night only to see the legends, John, Paul, George and Ringo on stage giving it large!

Confession: I never saw the previous tour of Let It Be so there will be no comparison.

I went into the show expecting something very similar to Jersey Boys or Mamma Mia. An actual retelling of the development of The Beatles. It was a shock when I realised this wasn’t happening. Instead the show falls into the category of a documentary. The narration carried it as The Beatles music plays out. It really was a glorified tribute act.

The first act was a little slow. Now, this may be because I am a little baby. This ginger was born in 1996 so, unfortunately, I never got to experience Beatlemania and my knowledge of their music consists of their biggest hits. A lot of the songs in the first act were from their early days, as you’d expect, start from the beginning. It wasn’t until the second act where I started to get into it. There were more songs I recognised and I started enjoying the presentation of the show.

The set was very minimal. The drums in the middle of the stage with the other band members close by. A very standard Beatles set up. This was all kept really simple but with the addition of a couple of props and help from the backdrop screen, it was noticeably clear when the ‘concert ‘changed. It was simple but effective. The backdrop was a screen displaying the different scenes or media for each number. Around the sides of the stage were 4 smaller screens in a retro TV frame. These were a really nice addition. The projections from the back wall were displayed on these but they were also used during the narration sequences. The vintage adverts were great to watch. I just wish that when the live performance was shown on the screen in real-time, that the images were distressed a little to be more in keeping with the appearance of the TV frames. It was a little weird-looking up and seeing high-definition images on a supposedly old TV.

The cast was great and you could tell that a lot of time had been put in on their side to get the mannerisms of their character down to a ‘T’. Emanuele Angeletti (Paul McCartney), John Brosnan (George Harrison), Ben Cullingworth (Ringo Starr) and Michael Gagliano (John Lennon) were great together and really looked and sounded the part. Although they were obviously forming a band, they all had their time to shine in the second act when a few solo songs came up.

Now we come onto the part that still has me torn. The encouragement of the use of cameras during the show. You are allowed to take photos and videos on any date of this tour, this wasn’t just reserved for the press night. In a way it is great for the show. It is free publicity and gives more of a concert feel however, as an audience member, it can be incredibly distracting. You had flashes going of, the glow of screens throughout the auditorium. I think what took the biscuit the most was the fact that people took this as an invite to use their phone for other reasons during the show. My biggest issue is that people were no longer living in the moment. I am very traditional with my beliefs that in the theatre you should appreciate every single moment because the cast and crew are giving their everything to bring that show together. I have a more detailed blog on my thought and opinions on this aspect of theatre, this will be coming soon.

Overall, I found this to be a rather enjoyable show. Leave everything you know about the standard ‘jukebox musical’ behind you. Definitely see this if you want a night of basking in the very best that the Beatles had to offer!

‘Let It Be’ is continuing its tour across the UK until the end of October. For more information on tickets and venues, head to http://letitbelive.com/united-kingdom-tour-dates/. 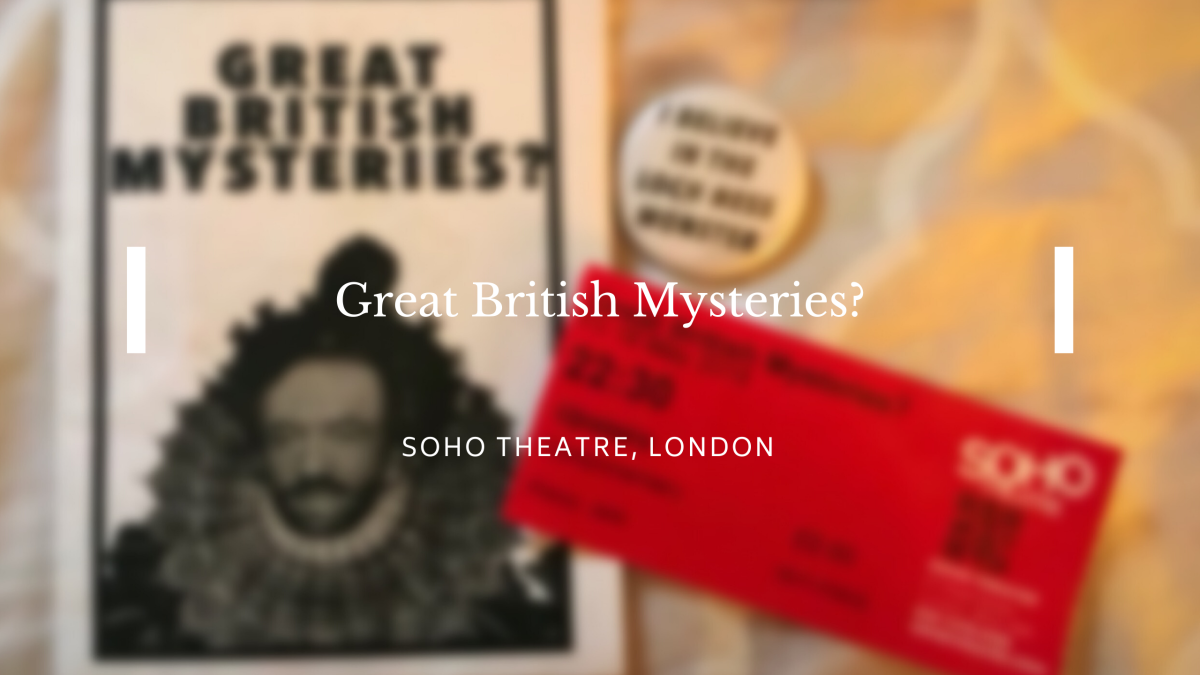 Where do I start with this one.

The best place is probably stating that I loved it!

I went in and the only thing I knew about the show was that it was a mockumentary. Now that could go either way.

The first 10 minutes, I found myself in the uncomfortable unknown. Olive Bacon (Rose Robinson) and Dr. Teddy Tyrell (Will Close) were setting the scene leaving the whole audience in limbo. A lot wanted to laugh at these early jokes but were still plucking up the courage. This probably wasn’t helped by the intimate venue (but this was actually the ideal setting)

It really didn’t take that long before Olive and Teddy had the audience in the palm of their hand. I have to admit, I can be a very tough nut to crack when it comes to shows like this and for me to sit there front row crying with laughter is a rarity!

I loved the whole set up with this being the final episode of their televised series, looking back at all the highlights which were voted for by fans. You get to see the pair’s less than serious approach to uncovering the truths about the greatest British mysteries known to man.

The chemistry between Rose and Will is really what kept the show going. They were able to bounce off each other so effortlessly. Their comedic timing was on point. This is something, as a performer you either have it or you don’t. If the script wasn’t funny enough the sudden corpsing  on stage really had the audience howling. But like true professional they were able to pick right up where they left off.

Joseph Hancock directed the show and although it was very basic and clearly on a budget, the use of the screen and the projector worked really well. It really helped break the scenes up and gave Rose and Will a bit of a breather. As an audience member I do find it nice to be able to draw my attention to something else and then go back to the laughter. It was all done in such a way that you didn’t miss anything.

Nothing about this show is serious which is why it was such a delight to watch. Harmless, silly comedy. Something I haven’t seen for a while. It is clear to see why it had a sold out run at the Edinburgh Fringe 2017.

If you claim to need evidence to believe this show is good before you purchase tickets, I have one thing to say….”evidence?!…..Shmevidence!”

Just get your tickets and know you’ll be guaranteed a great night.

Great British Mysteries is currently touring a select number of venues in its preview stage. More information on the venues and dates can be found on their twitter page.

Follow Ginger in the Theatre on WordPress.com
Join 800 other subscribers